Skip to main content
Groups of indigenous people gather in front of a camp.

Beginning in 1807, tribes from across the Great Lakes region began negotiating treaties with the United States government. With each treaty, the Indigenous peoples of the Great Lakes sought to protect their homes, people, and way of life.

During treaty negotiations, Federal government officials pressed Indigenous delegates over land and personal freedom. Tensions increased after congress passed the Indian Removal Act in 1830. Treaties typically favored the federal government, and many were broken soon after being signed. The Indigenous tribes that did not move lost more land but retained their hunting and fishing rights. The federal government forcibly removed many Indigenous people in the Michigan Territory from their land and moved them west of the Mississippi River.

Artists completed three hundred portraits. In 1836 and 1844, the D. Rice and company published 117 lithographs with accompanying biographies. Eventually, the Smithsonian housed the original portraits; however, in 1865, a fire destroyed all but five of them. The published lithographs are the only record of the original paintings. The images from this collection are from an edition housed in the Library of Michigan’s Martha W. Griffiths Rare Book Room.

Between 1807 and 1855, the Anishinaabe signed at least ten treaty agreements with the United States government. However, very few of these treaties were ever honored. State and federal officials focused on the assimilation and the eventual removal of the Anishinaabe from the Great Lakes region. Indigenous removal allowed more people from eastern states to move to Michigan. The increased migration sped up the process of applying for statehood by meeting the 60,000 resident requirement set by the Northwest Ordinance of 1787. Each treaty chipped away at the Anishinaabe rights, lands, freedoms, and way of life. Today, the federal and state governments have recognized hunting and fishing rights promised in treaties with the tribal governments.

For additional information on the treaties, please read “A Short History of Treaties“.

These paintings are rare examples of the people of the Great Lakes region during the early years of American settlement. The objective of this lesson is for students to examine similarities and differences between the delegates who attended these negotiations. Some lithographs show tribal leaders in ceremonial regalia that they would not have worn in every-day life.

Students can analyze these paintings as primary sources. For each source ask students to indicate: 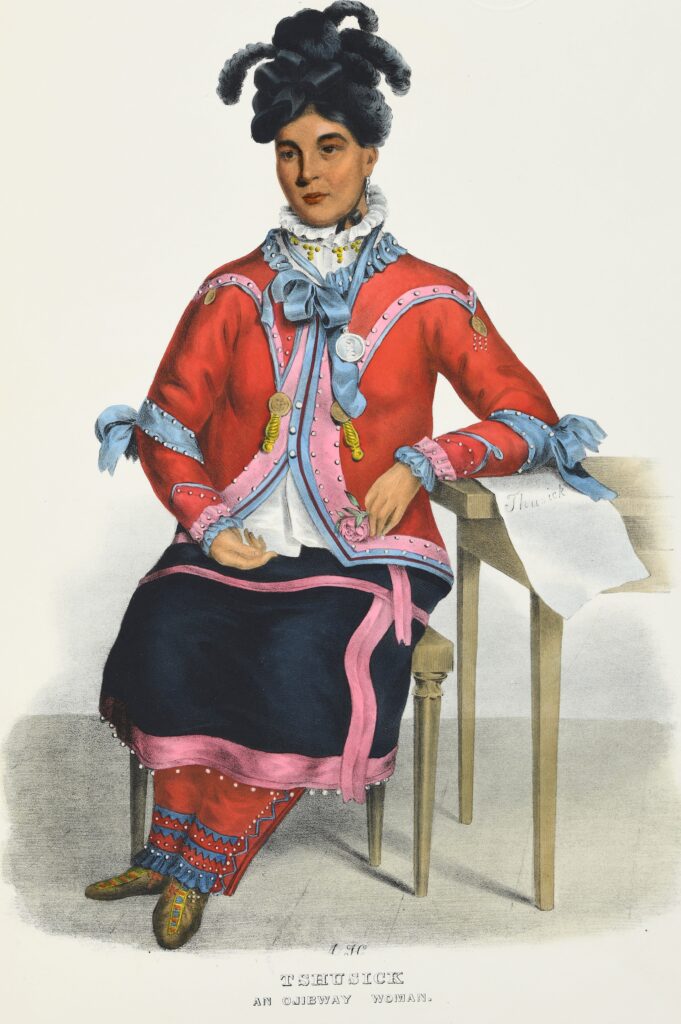 A selection of ten lithographs of Anishinaabe treaty delegates.