A Short History of Treaties

The United States entered into nearly 400 treaties with over one hundred tribal nations from 1778-1871. This timeline highlights five major treaties between the United States and Tribal Nations living within Michigan.  There are many more treaties than the ones highlighted here.

Tribes ceded, or gave up a large portion of land in what is now southeast Michigan and northwest Ohio in this treaty. The Odawa (Ottawa), Ojibwe (Chippewa), Wyandot and Potawatomi were allowed to have hunting and fishing rights. The United States government paid these nations a little bit of money, but they had to move off the land.  The Treaty of Detroit also set up reservations, or pieces of land where indigenous people were allowed to live.

Read through the original treaty, online at the National Archives. Here is just a snippet of the treaty showing three signatures. 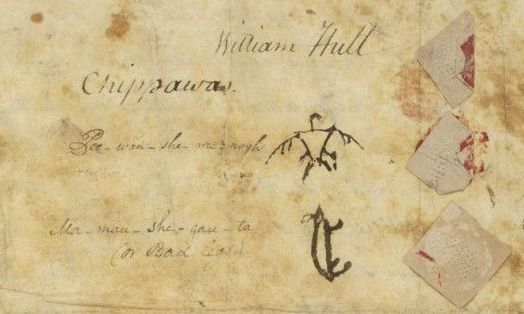 Review the original treaty, online at the National Archives. Here is just a snippet of the treaty.

In the summer of 1821, territorial governor of Michigan Lewis Cass went to Chicago to try and get more land from tribal nations. Lewis Cass met with approximately 3,000 members of the Potawatomi, Ojibwe (Chippewa), and Odawa (Ottawa) tribes.  In the Treaty of Chicago, these tribes ceded nearly five million acres of the lower peninsula of Michigan. In return, the United States government promised tribes about $10,000 in trade goods, $6,500 in coins and a 20-year payment valued at about $150,000.

Read through the original treaty, online at the National Archives. Here is just a snippet of the treaty. 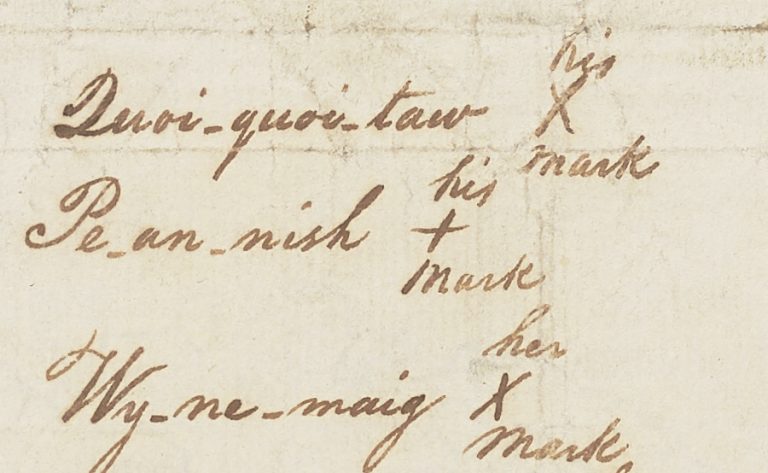 Review the the original treaty, online at the National Archives. Here is just a snippet of the treaty showing three signatures.

By 1855, the last of the treaties between the tribal nations of Michigan and state and federal government are signed.

This video chronicles how the United States seized over 1.5 billion acres from America's indigenous people. You can interact with this map on eHistory (https://ehistory.org/).

How does land use and ownership change during the statehood era?

How does land use and ownership change during the statehood era?

Who lived in Michigan at the start of the statehood era?

The Michigan History Center is creating stories, activities, and teaching resources for educators to use with students. The stories below focus on the Tribal Nations living in Michigan before and during the Statehood Era. This was a time of radical change for the Anishnaabe People living… Read More

Who lived in Michigan at the start of the statehood era?

What is a Treaty?

What is a Treaty?