Skip to main content
Wide shot of the States of Incarceration exhibit with a large purple introduction label visible in the foreground.

Michigan’s history of incarceration is full of contradictions.

When Michigan became a state in 1837, one of the first institutions proposed by the new governor was a prison. A decade later, Michigan became the world’s first English-speaking government to ban the death penalty. And by the early 20th century, Michigan State Prison in Jackson was the largest walled prison in the world.

“States of Incarceration” is a national traveling exhibit that looks at the history and future of mass incarceration in the United States. In It was created by university students and formerly incarcerated individuals from 30 communities across the country. Investigating why the U.S. incarcerates more people than at any point in our history and more people than any other nation in the world, they examined their communities’ histories, shared stories, searched archives and visited correctional facilities.

The Michigan History Center hosted the States of Incarceration exhibit from September 8, 2018 to May 19, 2019. We added information about the history of incarceration in Michigan, along with stories and artifacts from our own museum and archives collections.

The stories in this series all relate to the history of incarceration in Michigan. Some were featured in the States of Incarceration exhibit as it was presented at the Michigan History Center, others were created from detailed research that was not ultimately used in the finished exhibit.

Learn about the national traveling exhibition, States of Incarceration

States of Incarceration is a project of the Humanities Action Lab, a coalition of universities led by Rutgers University-Newark working with issue organizations and public spaces to create traveling public projects on the past, present, and future of pressing social issues. 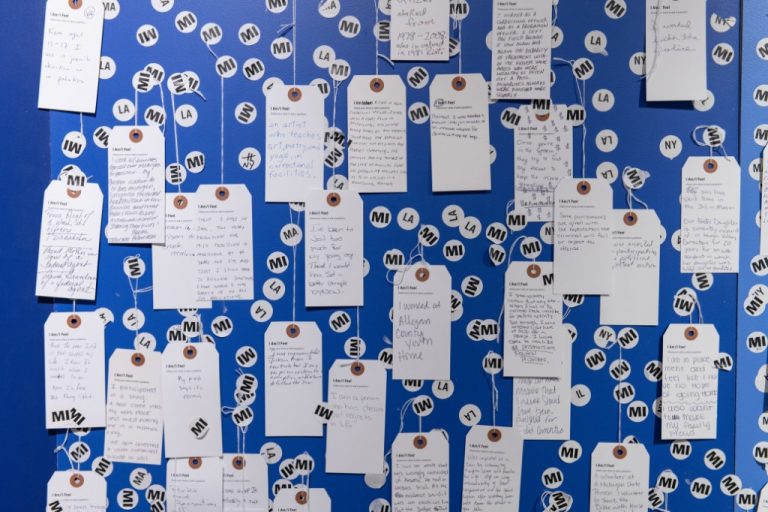 If you missed the exhibit during it's run September 2018 - May 2019, you can still get a feel for it by exploring the descriptions, photos and stories collected in this Story Series!

The St. Valentine's Day Massacre was a particularly bloody chapter in organized crime history. Seven men from Chicago's North Side Gang, headed by George Clarence "Bugs" Moran, were murdered by Thompson submachine guns in a warehouse on Valentine's Day, 1929. Though the perpetrators of the… Read More