Most wars leave people hurt or dead, and cause much damage.  However, the Toledo War was an exception.  It was not an official war.  No one died in the war and there was little damage.  Michigan and Ohio waged this war in 1835 over a small piece of land called the Toledo Strip.  Both wanted to develop the city of Toledo into a great commercial port.

The war began in the spring of 1835 when Ohioans started to survey the border between Michigan and Ohio. At the time, Ohio was a state and Michigan was a territory trying to become a state.  Because existing laws were unclear about the boundaries between future states, both Michigan and Ohio claimed the Toledo Strip.

Later that spring a Michigan sheriff’s posse of 30 men surprised a smaller group of Ohio surveyors working in Michigan’s Lenawee County.  Nine Ohioans were captured and imprisoned at Tecumseh, Michigan.  They were charged with violating Michigan’s Pains and Penalties Act. This Act said that any Ohioans found in the area between Michigan and Ohio could be charged and punished without a trial.

Several Ohio surveyors escaped capture.  They returned to Ohio and told Governor Robert Lucas that “an armed force of several hundred men” stretched across the border between Michigan and Ohio.

In midsummer, tensions grew.  On July 15, 1835, Monroe County deputy sheriff Joseph Wood arrived in Toledo to arrest an Ohioan who had violated the Pains and Penalties Act.  The Ohioan resisted arrest and stabbed Wood.  The wound was not serious and Wood recovered.  He was the only injury of the Toledo War.

In retaliation for wounding Wood, the Territorial Governor of Michigan, Stevens T. Mason, ordered a posse of 200 men to Toledo.  When they arrived in Toledo, the Michiganders discovered that Ohioans had fled to the safety of Ohio.

The Ohioans planned to hold a session of court in the Toledo Strip on the first Monday in September of 1835.  They hoped that doing this would make the land part of Ohio.

Territorial Governor Mason responded by sending a force of 1,000 armed Michiganders into Toledo.  Twenty-one year old J. Wilkie Moore wrote that, as they marched to Toledo, they “had a vast amount of fun.”  According to Moore, the farmers along the way “welcomed us enthusiastically because we were fighting for Michigan.”  Despite the warm welcome, Moore expected “bloodshed.”

When Mason’s men arrived in Toledo they found no Ohioan soldiers or government officials.  The Michiganders returned home thinking they were victorious.  They were wrong. The Ohioans had held their court session quietly and quickly.  Then they returned to Ohio before the Michiganders reached Toledo.

When Mason returned to Detroit, he learned that President Andrew Jackson had fired him as Territorial Governor of Michigan.  President Jackson replaced him with a new governor, William Woodbridge, who favored the Ohioans.  That autumn, the Ohioans surveyed the border with Michigan without any problems.

The Toledo War had ended, but more than another year passed before Michigan became a state.  In the end, Michigan was forced to give up the Toledo Strip in exchange for the western upper peninsula and statehood. However, Michiganders had the last laugh as the upper peninsula has full of important natural resources such as copper and lumber.

This article originally appeared inThe Mitten, a publication of the Michigan History Center.

The video give you a quick history of how Michigan became a state, including the Toledo War. 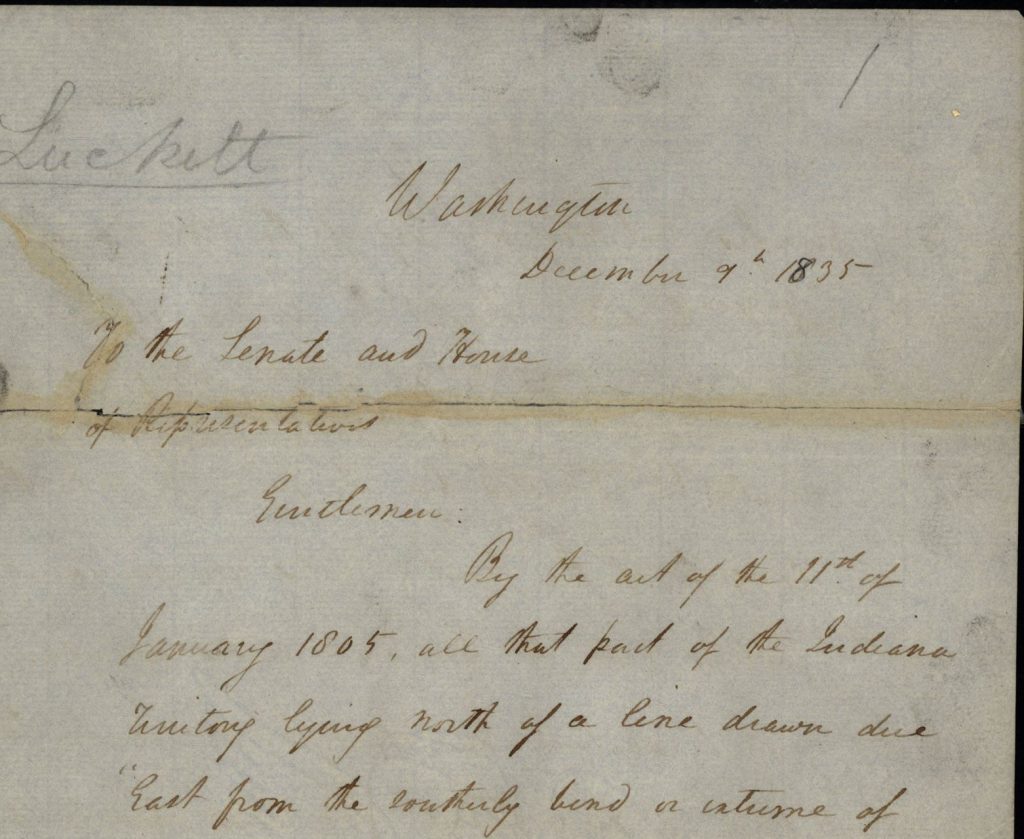 Dig deeper in a letter written by President Jackson to the United State Congress about Michigan and Ohio.

The First Try On January 12, 1835, territorial governor Stevens T. Mason announced that Michigan was ready to become a state. But, the United State Congress said no. Congress said Michigan had work to do before becoming a state. First, at least 60,000 people had to live… Read More

Who came to Michigan during the Statehood Era?

Who came to Michigan during the Statehood Era?

How is freedom defined during the statehood era?

The Michigan History Center is creating stories, activities, and teaching resources for educators to use with students. The stories below focus on how people fought and struggles for freedom during the Statehood Era. Did slavery exist in Michigan? Who fought against slavery and how? Did people… Read More

How is freedom defined during the statehood era?

How is citizenship defined during the statehood era?

This series of stories focuses on how white settlers, Anishnaabe People, and African Americans navigated, negotiated, and defined citizenship during the statehood era.  This series is part of Michiganology’s Statehood Era Subject and supports the compelling question, “How did people who live in and came to… Read More

How is citizenship defined during the statehood era?