Shadows from the Walls of Death

During the Victorian era, some wallpaper dyes contained poisonous arsenic to increase the brightness of the colors. “Scheele’s green,” created by Swedish chemist Carl Wilhelm Scheele in 1775, used copper arsenic because of its brilliance and durability. Arsenic made it cheaper to print wallpaper, especially Victorian designs with floral motifs.

19th century scientists believed that wallpaper poisoning occurred either through dust particles or via toxic gas production. Michigan had its own share of arsenic wallpaper poisonings, including an 1873 case involving a member of the House of Representatives and his two boys.

In 1874, Michigan physician and chemist Dr. Robert Clark Kedzie authored Shadows from the Walls of Death to raise awareness about the dangers of arsenic-pigmented wallpaper. The 22” x 30” book included a title page, an eight page preface and eighty-six samples of arsenic-laden wallpaper from stores in Lansing, Detroit and Jackson. Kedzie sent one hundred copies of this publication to Michigan public libraries to warn people about the silent killer lurking in their households.

Although well-intentioned, the book itself was problematic. Librarians did not want to inadvertently poison their patrons, so most copies ended up discarded or destroyed. Until recently, only four copies were thought to exist at the University of Michigan, Michigan State University, Harvard University Medical School and the National Library of Medicine. However, a recent reference inquiry led to a carefully stored fifth copy of the book at the Michigan History Center.

Here is the title page from the Wall of Death book. The frist sample of wallpaper show bright green accent details with repeating diamonds.

The Michigan Department of Public Health librarian Bill Nelton donated “Shadows from the Walls of Death” to the archives in 1996.  After realizing the safety precautions needed for this type of material, Dave Johnson (State Archivist at the time) thought it best if the book was transferred from the archives to the Michigan History Museum, where it is currently stored in a vault and encased in a protective covering. After all, this book could kill.

A version of this article originally ran in the Winter/Spring 2019 issue of TRACE, a publication of the Archives of Michigan.

On display through May 2020

A scanned wallpaper sample from "Shadows from the Walls of Death" is displayed in the Secret Lives of Michigan Objects exhibit. See it in person - and explore what it means to collect and care for the artifacts that tell Michigan's stories. This special exhibit features plenty of opportunities to share your thoughts, give feedback, and even help decide which artifacts should be added! 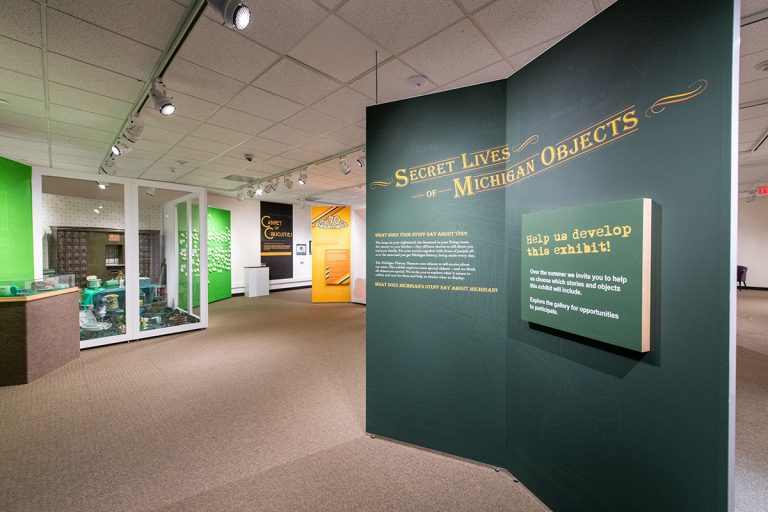