Skip to main content
Vintage colorful illustration of a man and woman having a picnic on a lakeshore. The title reads "Michigan Water Wonderland"

Here at the Michigan History Center, our staff holds an enduring fondness for Michigan tourism campaigns of days past. So much so, that many of the products we sell through the Michiganology shop feature the logos from such campaigns. The slogan Say Yes! to Michigan and Proud Robin graphic are a few examples. As you start to think about holiday shopping, consider giving the gift of Michigan history. Who wouldn’t want a classic, super-soft Say Yes! to Michigan t-shirt? As an added bonus, your purchases support education programs at the History Center. Visit the Michiganology shop to get started!

If you know the lyrics to “Yes! Michigan” you probably lived in Michigan during the 1980s. The ubiquitous theme song sticks in some of our heads!  Tourism is part of the lifeblood of Michigan. Last year, out-of-state visitors spent more than $2 billion dollars while touring our peninsulas.

The state’s current ad campaign is “Pure Michigan” with ads voiced by native Michigander, comedian Tim Allen. But, when did Michigan tourism campaigns begin? What is the oldest ad campaign to try and bring people to Michigan?

That honor really goes to a New Yorker named Charles Hallock. It wasn’t a traditional ad campaign, but he wrote about his fishing adventures in a book titled “The Fishing Tourist” in 1873. Hallock devoted an entire chapter of his book to the “Michigan peninsula.” It was the first time the state was highlighted for its lakes and rivers in the context of tourism.

A Scribner’s Almanac about hunting and fishing the Au Sable River region also featured the state in the late 1800s. During this time, specific resorts, shipping and railroad lines drove tourism by promoting themselves as a means to go north. This kind of toursim didn’t focus on a final destination. A great example is the Grand Rapids and Indiana Railroad’s 1870s campaign as the “Fishing Line,” complete with a map of the railroad watermarked by the Grayling fish or a person with a hooked fish on line.

As we move in the 20th century, tourism campaigns evolved. Michigan’s good roads movement changed the focus of promotion from shipping and rail to the automobile. Around 1917, a gentleman named Hugh Gray from West Michigan came on the scene. He really began tourism promotion as we know it today. Gray created some of the state’s first slogan’s including “Playground of a Nation” and “Carefree Days in Michigan.”

These slogans promoted the automobile as a way to get people up north. Regional campaigns emerged like the “West Michigan Pike” touting a road that delivered travelers to beach towns along west Michigan. Campaigns now featured communities as a destination point. these campaigns are the fore runners of Chambers of Commerce. You see partnerships develop between the tourist organizations and each town. Groups like the Upper Peninsula Tourist Association, East Michigan and Southeast Michigan Tourist Associations organized, following West Michigan’s lead. The auto touring sparked an interest in camping and pushed the newly formed Michigan Department of Conservation to think seriously about state park development, including camping facilities. The Civilian Conservation Corps made important contributions in the 1930s that led to a lot of forest restoration in recreational areas and public works that are still enjoyed today.

In the 1930s, state government officials saw the effectiveness of the regional tourist associations and wanted to be a part of it. There was resistance to a “state takeover” so the Michigan Tourist and Resort Commission was formed in 1934 to interface a statewide campaign with all the regional associations. Hugh Gray of West Michigan was named the first commissioner.

Early campaigns were meant to tell people where stuff was: “go to the dunes, Lake Michigan etc.”  The first true statewide campaign was “Michigan Water Wonderland” followed by “Michigan Winter Water Wonderland.” In the 1950s and 1960s, tourism promotion was meant to get Michigan residents to spend money in beautiful parts of the state.  In the 1970s, 1980s and 1990s, the promotion began to move away to non-specific attributes – like “Thumbs up to Michigan,” “Say Yes, Michigan,” “Yes! Michigan” and finally “Pure Michigan.” The focus wasn’t on one specific resource (lakes or snow) and even began to include promotion of Michigan’s urban areas.

Certain campaigns stand out more than others for both good and not-so-good reasons. “Say Yes to Michigan” enjoys a renaissance right now. It’s campy and is the campaign of many people’s youth.  My current favorite is “The Michigans, the Almost Islands of the Great Lakes.” That was a 1971 campaign by the Detroit agency Ross Roy. It is interesting that this is also the only statewide campaign that focuses on both peninsulas and was launched a couple years before talk of the Upper Peninsula becoming its own “State of Superior” became serious.

“Pure Michigan” has endured as our state’s campaign for over ten years. Interestingly, it was originally named “True North,” but some of our Great Lakes neighbors took exception to that idea. In many ways it is hard to beat “Pure Michigan.”

Sure, people have had fun with it in spoofs but if you are born here, from here, or live here, you are part of a special club. If you don’t feel that you are, we are working on you!

This post originally ran on Seeking Michigan (the predecessor to Michiganology.org) on May 2, 2018.

Tourism Campaigns of Days Past

Here are a few of the tourism campaigns mentioned in this blog post. Enjoy!

Give the Gift of Michigan History

At Michiganology, we may be archivists and historians, but at our core we are history nerds. History surrounds us; it motivates us every day. We are devoted to our craft and enthusiastic about everything that is Michigan. With each Michiganology product, you are getting a piece of Michigan history that is handpicked by us and reflects everything great about our state. At the Archives of Michigan we are not just reviving the past, we’re fighting the future! 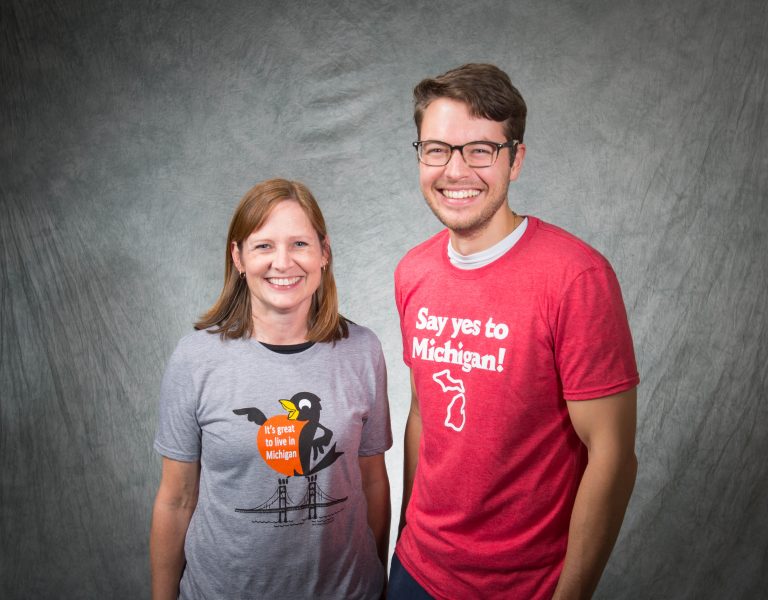