The Archives of Michigan is digitizing material from the Minoru Yamasaki Collection as an ongoing project. Images document of Yamasaki's architecture firm and the various project they completed, documenting scale models, construction, and the finished buildings. The collection also contains plans and drawings as well as portraits of individual architects. 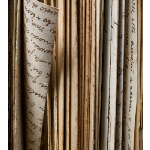 A Legacy Was Born

Minoru Yamasaki was born to a struggling family in a poor Japanese-American neighborhood of Seattle. He lived his first few years in a tenement without indoor bathrooms. Yamasaki graduated from Garfield Senior High School in Seattle. While in high school, he decided to devote his life to architecture. He enrolled in the University of Washington’s architecture program in 1929. During Yamasaki’s college years, faculty member Lionel Pries encouraged his interest in Architecture. He earned money to pay for his tuition by working at an Alaskan salmon cannery and graduated in 1934.

The Young Architect from Seattle

After graduating from the University of Washington, Minoru Yamasaki moved to New York City. He enrolled in New York University and earned a master’s degree in architecture. Yamasaki found employment in the city with several prominent architectural firms including, Shreve, Lamb & Harmon who designed the Empire State Building.

From the West to the Mid-West

In 1945, the Detroit firm of Smith, Hinchman & Grylls recognized Minoru Yamasaki’s talents and hired him as their chief designer. Four years later Yamasaki started his own architectural office. After achieving national recognition with the St. Louis’s Lambert Airport terminal in 1956, the style and inspiration of his architectural designs underwent a drastic change. Inspired by great architecture from the past, Yamasaki turned toward a gentler, more decorated style of modernism, and away from the more severe, rectangular glass box style that characterized some of his early work and much of the contemporary architecture of the era.

Minoru Yamasaki wedded his interests in modernism, history, and human behavior to create a uniquely modern architecture.  This marriage can be seen in such nationally-admired works as the Reynolds Metals Regional Sales Office (Southfield, MI, 1961) and the Michigan Consolidated Gas Company (Detroit, 1963). His success led to favorable reviews in architectural journals, museum exhibitions of his work and his most prominent commission, the World Trade Center in New York City (1970-73). Yamasaki created a five-acre complex with two 110-story towers – which were briefly the tallest buildings in the world – as the centerpiece.

In addition to content on Michiganology, you can find more original material and published books on Minoru Yamasaki at the Archives of Michigan.